Ingal Travels Beyond the Patent Claim 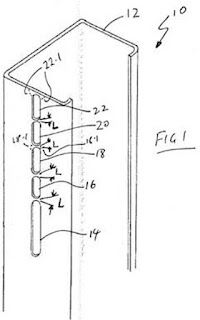 The instinct to draft a claim as broadly as possible is natural. That is "safer" than attempting the Scylla and Charybdis of drafting claims that cover preferred embodiments while still providing effective protection.

However, this case indicates that such practice may result in the patentee having narrower protection than it may think.

The legislation as it existed before the Intellectual Property Amendment (Raising the Bar) Act 2012, was applicable here.

This post is limited to the issues of "Fair Basis". This concept is no longer applicable. However, the requirements are now stricter, so this case is useful in assessing the minimum compliance requirements. Also, the particular aspect of fair basis relevant here is that to do with the relationship between a patent before and after an amendment, referred to as "external fair basis".

Safe Direction contended that the Patent discloses an invention which is a post for a guard rail system, or a guard rail assembly comprising such a post, having axially aligned apertures or slots located above the mounting hole (the axial alignment feature). It submitted that  a combination of claim 1 of the Final Patent including only “said post including one or more apertures or slots spaced from spaced mounting hole and at or below said upper edge” does not adequately limit the scope of the invention claimed to meet the breadth of the disclosure in the Patent. In particular, the breadth of that integer indicates that the claim covers a non-axially aligned configuration where the apertures or slots may be spaced adjacent to or even below the mounting hole. This, Safe Direction submitted, claims matter not in substance disclosed in the Patent.

In the court's view, the disclosure of the Patent is of a post for a guard rail system and a guard rail assembly that consists of a number of features and which includes a limitation that the apertures or slots be located above the mounting hole and that they be axially aligned with a central longitudinal axis of the mounting hole (that is, the axial alignment feature). The apparent purpose of the particular alignment of the apertures or slots is, as Dr Plaxico (expert witness) said, to create a pathway for the bolt and the lands between these slots which are meant to create resistance by impeding the bolt’s upward movement through the slots. In reaching this view the court had regard to the whole of the disclosure of the Patent.

The Summary, it was held, informed the skilled reader that the invention provides a combination consisting of a post for a guard rail system that includes three requirements: first, that the post includes an elongated mounting hole for the connection of the guard rail to the post; second, that it includes one or more apertures or slots located above the mounting hole; third, that the apertures or slots are axially aligned with the central longitudinal axis of the mounting hole. The second and third of these requirements contain the limitation present in the axial alignment feature referred to by Safe Direction.

The purpose of the axial alignment of the apertures above the mounting holes was discerned from other parts of the specification and from the expert evidence. For example, the patent sets out that the land between adjacent slots is adapted to be torn or sheared by a bolt which is initially located in the mounting hole as the guard rail moves upwards relatively to the post during a collision. In the Detailed Description of the specification an embodiment involves the coaxial arrangement of a series of slots or apertures that are substantially the same width as the mounting hole. The slots or apertures have a central longitudinal axis collinear with each other and the central longitudinal axis of the mounting hole. The Detailed Description describes the lands being sized to enable the bolt that is located in the mounting hole to break or fracture the lands as the rail is forced upwards in a collision. The Patent describes that the post and rail assembly will ensure that the rail is secured to the post but is not clamped to it, thus making it easier for the bolt to slide up through the lands and through the adjacent slots towards the top edge in the case of a collision. The Patent also refers to the use of a nut which is preferably torqued onto the bolt so that the rail will only move upward when subjected to a force of collision of a predetermined amount.

It was apparent to the court that the axial alignment feature serves the purpose of facilitating the controlled upward movement of the rail in the event of an errant vehicle coming into contact with it. Professor Grzebieta (expert witness) gives the opinion that the purpose of the lands between the apertures and slots is to allow “the guard rail to remain in place for as long as possible by its controlled released [sic] from the post, which in turn facilitates redirection of the errant vehicle away from the hazard”, and that making the lands between slots frangible or weakened in portions is to assist in that process.

In a show of lip-service to the well-worn authority of claim interpretation, Decor v Dart FCA 682, the court held that the embodiments are only examples of the invention described, and do not serve to limit its scope. Nevertheless, the court held that the specification of the Patent is to be read as a whole in order to understand the matter disclosed, and the repeated references to upward force causing the bolt to move upward relative to the post reinforce the skilled reader’s understanding that the axial alignment of the mounting hole and apertures or slots is an indivisible part of the combination identified as the patentee’s invention.

The court referred to a description provided by the expert witnesses as providing a technical explanation for the importance of the relative positioning of the mounting hole to the apertures and for the emphasis placed in the Patent on the particular arrangements described. That confirmed to the court the importance of the affirmative disclosure in the specification of only apertures located above the mounting hole and the importance to be attached to the Statement of the Invention (the Summary). It served to reinforce the court's view that the patentee disclosed, and intended to disclose only a form of release mechanism that involves the axial alignment feature.

It is relevant to note that the court identifies a "concession tied up in Professor Grzebieta’s observations in the joint expert report" that whilst a slot could be used in another way if differently arranged, the Patent does not describe any such aperture arrangement or use.

The court held that the language of the claim places no constraint on the location of the apertures or slots. They may be located in a position that is not axially aligned with the longitudinal axis of the mounting hole and they may be located next to or below the mounting hole. Thus, the patent (after the amendment) claimed matter that was not in substance disclosed as a result of amending the application.