3.2.18
According to the Wikipedia, a blockchain is "a continuously growing list of records, called blocks, which are linked and secured using cryptography. Each block typically contains a hash pointer as a link to a previous block, a timestamp and transaction data. By design, blockchains are inherently resistant to modification of the data." And "for use as a distributed ledger, a blockchain is typically managed by a peer-to-peer network collectively adhering to a protocol for validating new blocks. Once recorded, the data in any given block cannot be altered retroactively without the alteration of all subsequent blocks, which requires collusion of the network majority." The Harvard Business Review also has an interesting article about blockchain technology.

But how does this relate to patents?

A number of corporations have obtained blockchain patents. Security First Corporation is one of the early players. Considering their website, it is no suprise that they have an interest in this patent field. 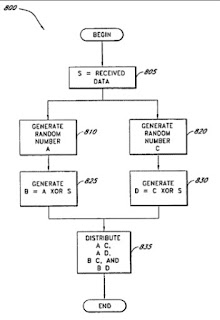 The priority date of  this patent is 25 October 2004. If that seems old, consider U.S. Patent 4,924,513A, which has a priority date of 25 September 1987. I began my career in 1990. The most technologically advanced machinery on my desk was an analogue Dictaphone. 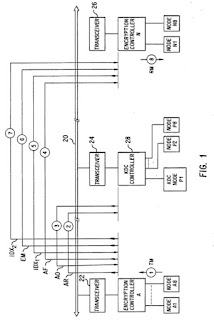 I won't set out Claim 1 here. It's a little verbose. In short, it deals with transmitting data over a network channel using various encryption keys that are made known only to those network devices that are permitted to handle information encrypted with the encryption keys.

Whether this is strictly a blockchain is debatable. However, what is quite clear is that this and other old patents have long since anticipated the principles of blockchain.

Where does this leave patents?

It is trite law, particularly in Australia and the United States, that simply characterising data is not enough to clear the subject matter bar of our patent systems, as unique as the application may be.

Without getting into the intricacies, some of which are explained here, an invention needs to be a technical contribution to a particular field. Sometimes, it's enough to say that the computer works more efficiently as a result of the execution of the software. For example, a new or improved operating system may be patentable. In the case of a blockchain application, it could be argued that the establishment of a secure network is a technical contribution. Applying the tests set out in the notorious NRDC case, and discussed here, it could be argued that the execution of a blockchain application results in an artificially created state of affairs and in the generation of a vendible product. So, the "weed-free field" of NRDC could be compared to a secure data communications network.

However, as any follower of the blockchain movement will tell you, the field is incredibly busy, with innovators and entrepreneurs coming up will all sorts of different applications, all making use of the same underlying technology. It's going to get increasingly difficult to conceive of an application that ticks the boxes for proper subject matter. Let me provide two examples, one not capable of supporting a valid patent and the other capable of doing so, in my humble opinion.

Any blockchain application that is used in the financial services industry is going to struggle. Not only are patent examiners inherently suspicious of that industry, but the products that the industry generates are usually just those that can be replicated with pencil and paper or standard electronic spreadsheets. That is, their uniqueness lies in the data itself. It follows that this type of application would likely not be patentable subject matter.

This just sprang to mind. Consider a detachable "black box" mounted in a vehicle and connected to the on-board computer. The box contains firmware that executes a blockchain application on the data received from the on-board computer. A seller allows a user to connect to the box to download a full history of the vehicle. This could very well be patentable since the firmware/software combination would need to be unique.

That's enough for now. I find blockchain fascinating so I may indulge in a few more posts.