The Power of the Innovation Patent 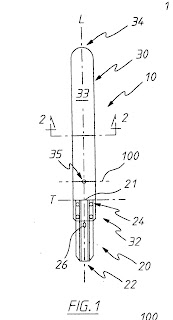 A while ago I reported on the successful enforcement of an Innovation Patent - "Innovative Step Confirmed".

This morning while I was driving my son to school (the joy of working from home!), I saw the very reflector posts that were the subject of the Innovation Patent upheld by the Full Court. There they were, clearly of sprung steel, with the concave surface facing the oncoming traffic. Interestingly, interspersed between them was an example of the prior art cited against the innovation patent. The prior art examples look a bit broken and battered. Clearly, council (or whoever looks after the roads) is replacing them with an embodiment of the invention covered by the innovation patent. Given the amount of roadwork going on around here, someone must be making some good money out of the reflector posts. They are also being used on all the new roads I've seen.
Now, I'm not sure of what the real commercial story is here. But if it wasn't for the innovation patent, I'm pretty sure that someone else, or perhaps a whole bunch of people, would be putting those reflectors in the ground.